Note: a stick clip is essential for the harder mixed routes at this crag.

Donate online to our bolt fund at 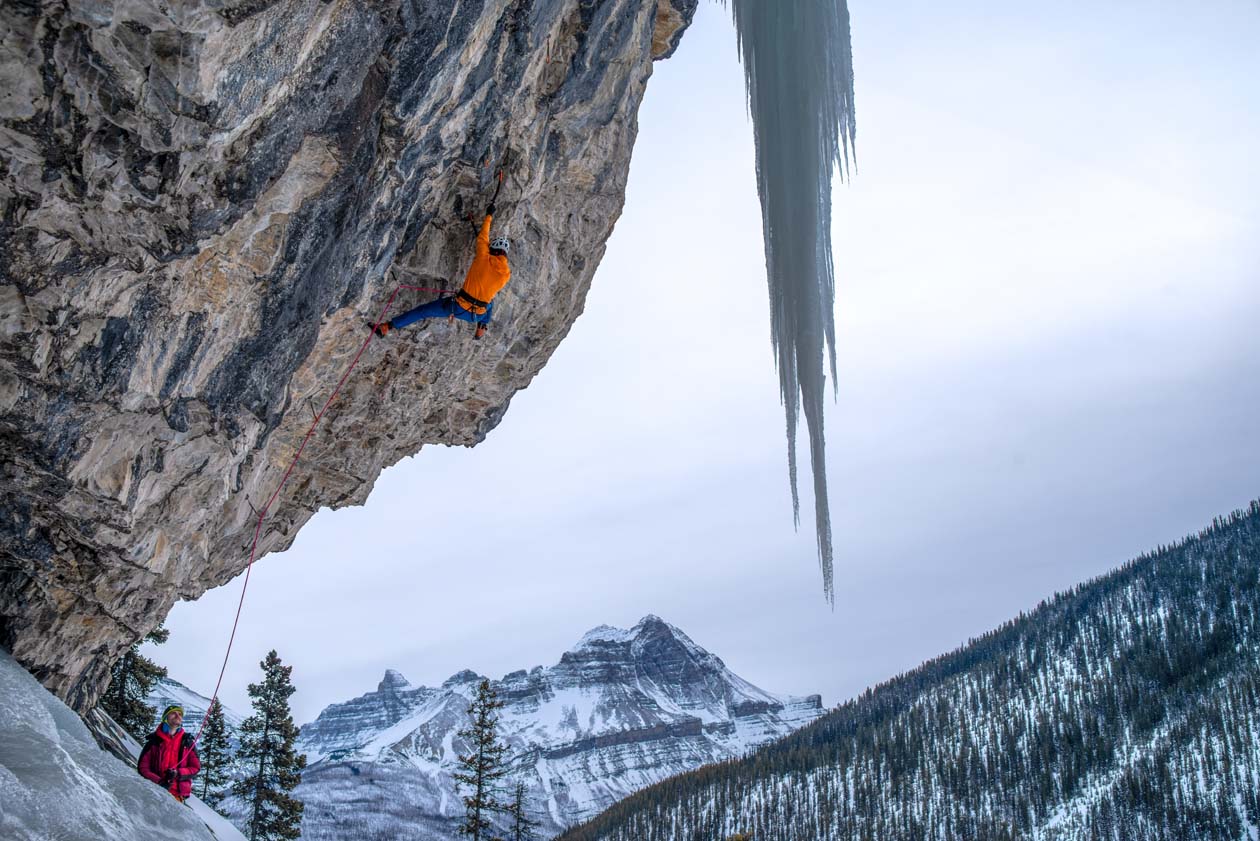 Mythos crag is located up Owen Creek on the edge of Banff National Park along Highway 11 (David Thompson Highway).

The Approach is straightforward and follows the summer hiking trail up Owen Creek. The approach takes around 1.5-2 hours if the trail is broken in and 2-3 hours if you are breaking trail. Around 45 minutes -1 hour into the Hike you will be able to see the Mythos crag up high on the right hand side. Keep following the creek till you reach a spot with a cairn on the left and head into the trees following the occasional piece of flagging tape to a small slope beneath the crag. Hike up the slope and you will have arrived at your destination. There is Avalanche Hazard on the final slope on the approach which can be avoided by staying in the trees on the left as you approach the crag. Everything above and beneath the climbs is below the treeline. 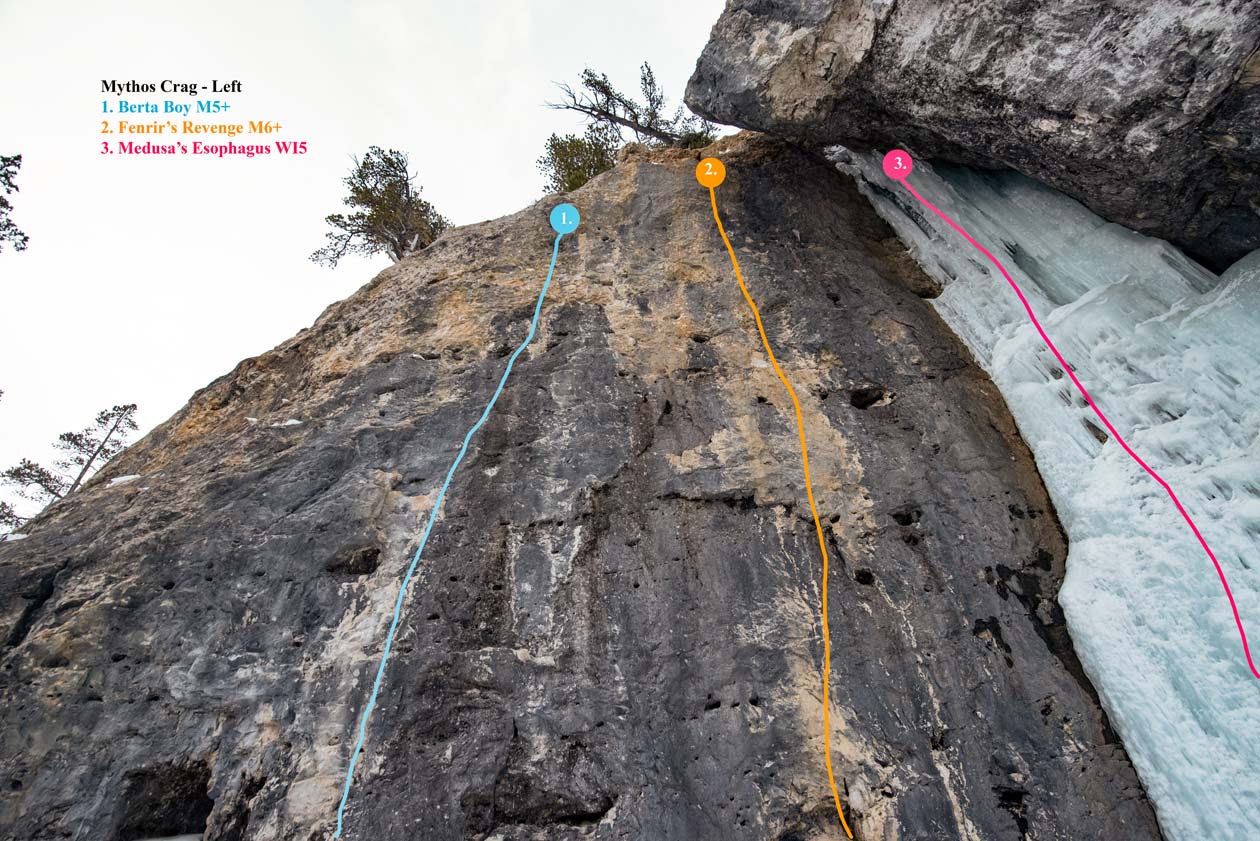 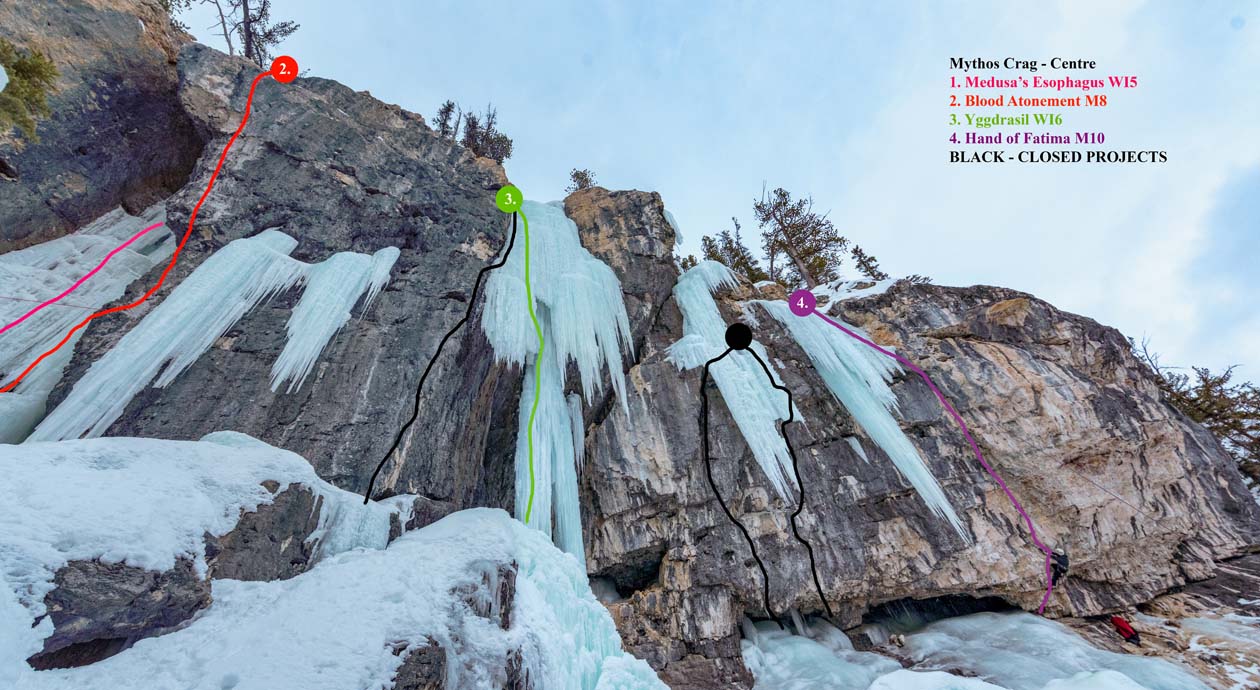 Any routes not specifically mentioned here or marked as closed projects on the topo are unfinished routes, please do not climb them, route development is still ongoing!

From Left to Right:

Climb up the vertical wall using amazing pockets and edges as the pump builds until the crux hits you just before the anchor.

Climbs the main flow that comes down through the rock chasm on the left end of the crag. Fun moderate ice with a steep finish to keep you on your toes. End at a bolted station.

Note: It is possible to walk around and set up a top rope. Rap into chasm off a large tree above, set up anchor off ringbolts on climbers right.

If you can stick clip the 2nd bolt, do it, otherwise start up on the right edge of Medusas Esophagus and climb up to where there is a hidden stein commit to the face and clip the 2nd bolt. Climb up over the first roof and fight off the pump to get yourself over the final crux roof to a finish on slab. Rest up and scratch your way to the anchor.

Climb up the steep pillar to where you can get good screws in then commit out to the hanging curtains that surround you. Once you get established on the curtains climb up to the top where a bolted station on the left end of the flow awaits. A pretty surreal climb.

Climb the wildly overhanging corner feature with delicate feet and some technical moves. Pull the final roof onto ice and climb easily to the anchor. Gear: Draws and screws

Note: Stick clipping first bolt is mandatory. There is also a single bolt on the ledge for the belayer. 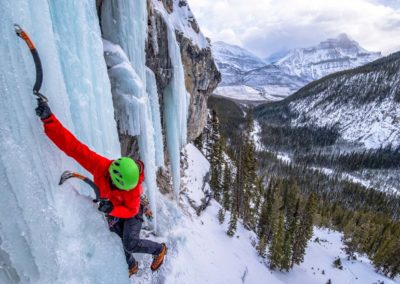 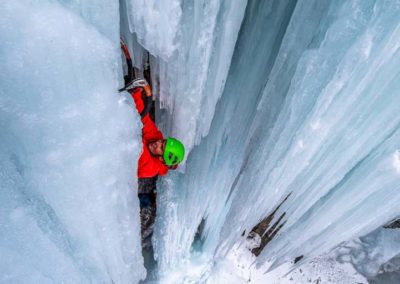 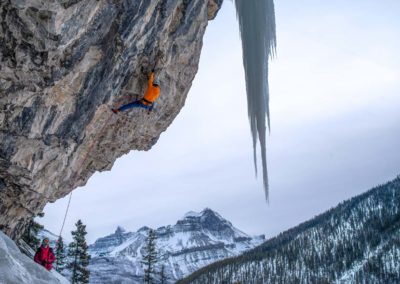 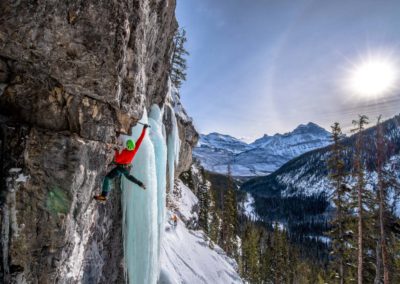 Climbed it? Tell us about it!